The Baltic Sea is known for its hard and violent winters. The areas around it have snow coverage for about 3 to 4 months of the year and the temperatures remain around or below zero for the same time. This year it’s been even longer. Even though Baltic Sea cannot be compared to the big oceans in its vastness, it still has a such a huge body of water that only about 45% of it freezes during the winter. The thickness of the ice varies from 70 cm (30 inches) in the coastal regions to 40 cm (15 inches) out on the open sea. 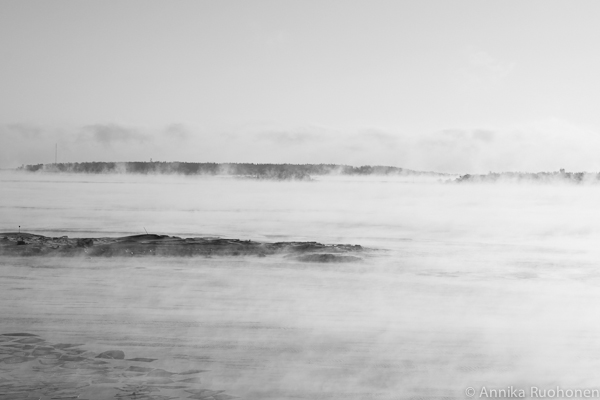 Even though there is so much ice on the sea, the water temperature stays around freezing point throughout the winter, at the moment the sea water is only about -2 degrees Celsius outside Helsinki where these pictures were taken the day before yesterday. It is curious that you can see free flowing water when the air temperature was -22 C (-7F) but in these important routes there is boat traffic all the time that keeps the sea open. And when it does freeze over despite all the traffic, there are huge ice breakers that reopen the routes for commercial traffic. Boat traffic to Sweden and Estonia is very lively and there are many huge cruise boats going back and forth every day. Being on the boat can get a bit claustrophobic around this time of the year when going to the deck is out of the question – except for quick photo-ops like mine. I remember one boat trip from Germany to Finland in the 1990s in the middle of the winter, it took days and it was impossible to sleep because of the noise that the ice made when it hit the side of the boat. 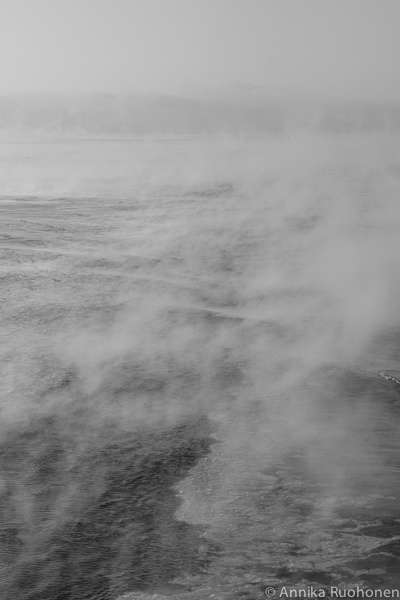 Being on the boat always brings two things to my mind. One is the worry of our beautiful sea and its well-being. There is much talk of the bottom of the sea being completely oxygen deprived and dead. Finns blame the factories in St. Petersburg, but we’re most probably as guilty as everyone else around us. Recent study says that there are recent fossil studies that show Baltic Sea being oxygen deprived already thousands of years ago. All this talk reminds me of the Global Warming talk, media discussions going from ‘yes it’s getting worse and fast’ to ‘it’s just another phase and it’s going to get better again’. I can’t help worrying and it makes me very sad to hear how people neglect and abuse our beautiful sea. There is a wonderful Baltic Sea Portal on the internet where you can learn more about the sea. Another thing I always remember on a boat is M/S Estonia. It sank in an area between Finland and Sweden in September 1994 in a raging autumn storm. 850 people of the 1000 who were on the boat were killed, about 500 of them have never been found. The boat still lies at the bottom of the sea 59° 23′ N 21° 42′ E. You can read more about its sad history here. 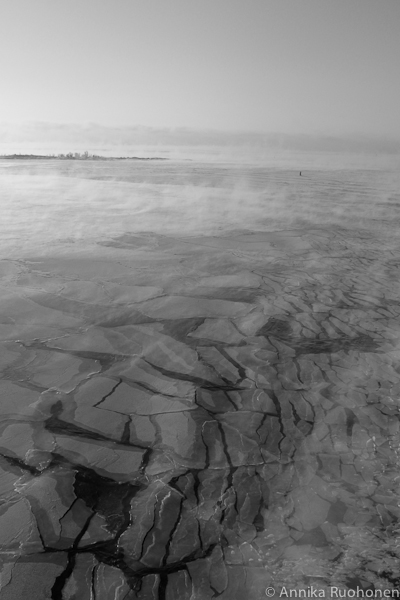 In the northern Finland where I lived as a child the distance to Sweden over Gulf of Bothnia is about 200 km and it is frozen every winter. When I was a child my parents used to point to the sea and tell me that there’s Sweden across the sea. I remember how that appealed to my imagination and I even thought that I saw a glimpse of the neighboring country in the horizon. Later when we started skiing on the ice with the school  I realized that there is always another island behind the one you see. 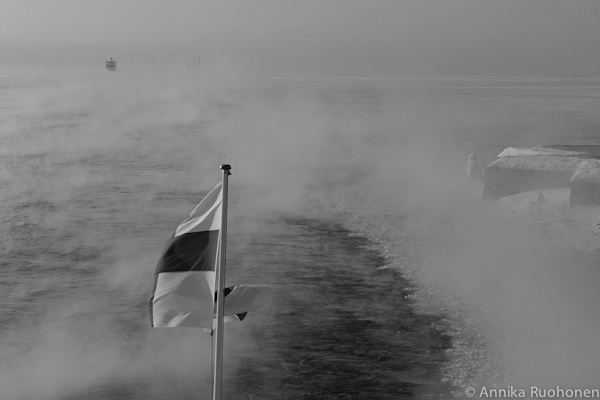 8 thoughts on “Baltic Sea at this time of the year”